For Someone: a night of words and music by K. Van Petten 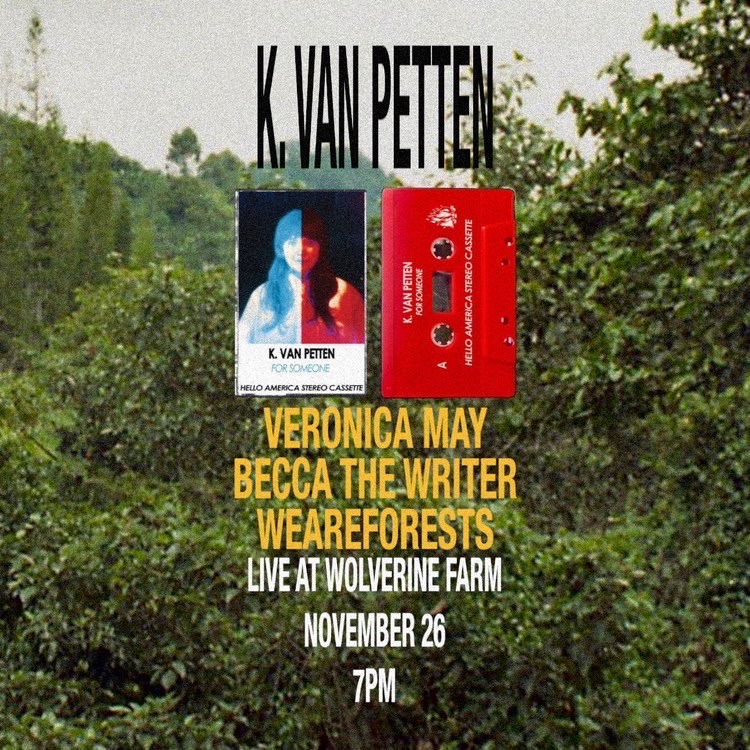 FOR SOMEONE: A night of words and music at Wolverine with K. Van Petten
Featuring Veronica May, Becca the Writer, and WEAREFORESTS
Saturday November 26th at 7PM. This is a fundraiser to support those affected in the recent tragedy in colorado Springs. https://www.coloradogives.org/donate/COHealingFund?fbclid=IwAR2nAsl8PrUIZsDiu2IBh-LsDKaI7SQtv7wehOfOVx33wulA0dPk428Xkxs

K. Van Petten (they/them) is a poet and songwriter based in Seattle. Their hybrid audiobook of poetry and music was released on November 18th with Hello America Stereo Cassette (@helloamericalit), and their second full-length album of music is set to release in 2023 on @dancecrydance records. You can find their music under ‘Baddy Gold’ and their poems in zines floating around Seattle coffee shops. ⁠

Becca the Writer is an author, TikTok content creator, digital nomad, and ghostwriter with dozens of bestselling novels and memoirs under her belt, the majority of which are under the lock and key of a nondisclosure agreement.

With an extensive background in percussion, piano, and guitar, Veronica May is a sight to be seen. May has been playing piano for over 20 years, percussion for over a decade, and guitar for several years. She grew up in a small town with big love. Her mom and dad played in a 1970s band called the Flatlanders.