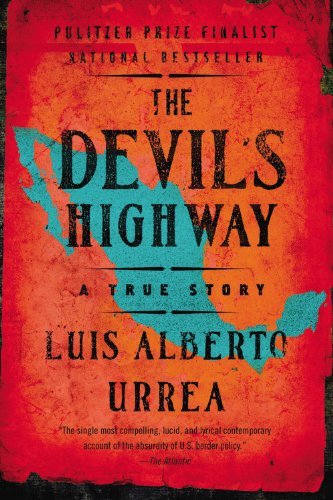 Our book pick for October is The Devils Highway: A True Story by Luis Alberto!

We’re excited for this discussion at the book club and hope you can make it!

In May 2001, a group of men attempted to cross the border into the desert of southern Arizona, through the deadliest region of the continent, a place called the Devil’s Highway. Fathers and sons, brothers and strangers, entered a desert so harsh and desolate that even the Border Patrol is afraid to travel through it. Twelve came back out.

Now, Luis Alberto Urrea tells the story of this modern odyssey. He takes us back to the small towns and unpaved cities south of the border, where the poor fall prey to dreams of a better life and the sinister promises of smugglers. We meet the men who will decide to make the crossing along the Devil’s Highway and, on the other side of the border, the men who are ready to prevent them from reaching their destination. Urrea reveals exactly what happened when the twenty-six headed into the wasteland, and how they were brutally betrayed by the one man they had trusted most. And from that betrayal came the inferno, a descent into a world of cactus spines, labyrinths of sand, mountains shaped like the teeth of a shark, and a screaming sun so intense that even at midnight the temperature only drops to 97 degrees. And yet, the men would not give up. The Devil’s Highway is a story of astonishing courage and strength, of an epic battle against circumstance. These twenty-six men would look the Devil in the eyes – and some of them would not blink.

We all need a witness.

WWJD: Who Would Jesus Deport?

This event will be held downstairs or outside (weather permitting) and is handicapped accessible.